I am a dark-skinned, Bengali, currently living in Montreal, Canada. Growing up in a culture of colorism, where a fair skin person is considered to be superior, I always felt uncomfortable in my own body. I have been guilty of indulging in fairness creams in the hopes that one day, my skin tone will somehow slide to the fairer side. LOL. My very own relatives called me out for being dark-toned. Super great stuff. And no, Bollywood actresses didn’t really help with this situation.

I never considered myself to be pretty. Neither am I fashionable. Your girl wears baggy sweatpants all year long and she LOVES it. Other’s pandemic fashion has been my lifelong fashion, to be honest. The whole concept of self-love and self-care was new to me and I just accepted myself as the dark-toned, tiny person in the sweatpants.

I was always fascinated by tattoos in general. Its connotation with rebellion, the mafia, a bold statement, a mark of identification, a walking body of art: it all seemed surreal and really cool to me. Until recent years, tattooing was considered taboo in India. Even though several villages and tribes in India identify their members using a poke-style of tattoo, the whole mainstream tattoo culture is still looked down upon, especially if you identify as a woman. The hipster culture is now in full swing in India with a steady growth of hipster cafes, pubs, and restaurants. This means that you will generally get a lot of tattoo studios dispersed throughout the metropolitan cities (I am not sure how prevalent tattooing is in non-metropolitan cities).

I do know that there are several jobs, especially government jobs, that can deny you a job offer if you happen to have tattoos in visible areas like arms, neck, etc. Some jobs will ask you to get a laser removal treatment done (harsh!) whereas others might ask you to cover them up while you are in the office. Bottom line, as a culture, we are still not comfortable with the concept of tattoos in India.

When I get a tattoo, I always thought it needs to have a meaning or at least some sort of significance. Maybe it will be a commemoration of the life event that was happening at the time or just a capture of things I like and believe in. I did happen to stumble upon a subreddit thread of people who got their partner’s name tattooed, broke up, and then managed to cover up that name with something else. I also never liked the standard offerings of some small-scale tattoo parlors where it is either the infinity loop design with “hope” written in cursive or some very cliched quote on life that very rarely holds true.

I think the first time I developed a strong resolve for getting a tattoo was when my maternal grandmother passed away. She was one of the most important people in my life and I wanted to hold her close to me even when she wasn’t around. The best way was to have something tattooed in her honor. It was going to be my reminder that she is around me all the time. So I got my first tattoo for her: a tree with bare branches and one leaf. An ode to the story “The Last Leaf” by O Henry. A couple of years later, I got another tattoo in her honor. It is my favorite tattoo so far: her last words to me before she passed away, written in my native script by my Mom. As I sit in Montreal, 12000km away from my home, I get to carry two of my favorite people with me at all times.

A couple of weeks ago, I stumbled across my friend’s post on Facebook. She is my tattoo inspiration. She documents her tattoo journey on Instagram and each of her tattoos is full of meaning and depth. She shared a post by Suzeart about how tattooing is kind of like getting comfortable in your own skin and used it as an analogy about painting the walls in your home and settling in. I like that. My inks are a gradual way of accepting this anxious, dark-skinned, Bengali girl’s body. Let’s hope that one day I finally settle in! 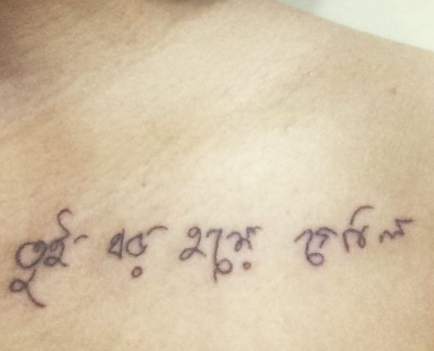