What is my research project about? Part 4

As we look at the ages of the Angel Island rocks, we also wanted to understand how these rocks deformed within the subduction zone. Using both dating and microscopy techniques will allow us to develop a more constrained classification scheme for the mapping of Angel island and understand the sediment deposition processes that led to the formation of these rocks.

So far, our zircons tell us that the Angel Island sediments entered the subduction zone episodically about 85-110 million years ago. As the sediments entered the subduction zone, the different components present within the sedimentary rocks caused them to develop different structures and progressively develop metamorphic minerals as the pressure-temperature conditions changed. I have observed only the meta-sedimentary rocks thus far (meta-sedimentary referring to formerly sedimentary rocks that have developed metamorphic characteristics). To start with, these rocks originally had two distinct components: clasts (of minerals and/or rocks) and matrix ( a more ground-up version of the clasts with presence of mud, clay, etc). The samples contain different ratios of clast to matrix and this causes the rocks to deform differently as it responds to stress.

We use a range of microscopic techniques to understand what is going on within these rocks at a smaller scale and relate that observation with what we see on the field. We begin in the field when we are collecting our samples. We collect “oriented” samples where we mark the direction and how the rock is inclined in its natural state. Since we are collecting heavily deformed rocks, we take extra precautions to wrap the collected sample in the right kind of packaging material so that it stays intact. Once we are back in the lab, we try to reinforce any loose bits using hard epoxy and then try to re-orient the sample back in the same field orientation. Once we lock down that orientation, we try to identify the rock face which will provide us with the maximum information about how the minerals recorded deformation. We call such a surface the observation plane. After that, the sample is taken to the rock-saw where we cut the rock aligned to the identified observation plane. Since we finally want to study these rocks under the microscope, we cut the rocks to a standard slide size and call it a billet. These billets are usually sent to an external service where the thick rock billets are turned into glass slide-mounted rock “thin-sections” that are approximately 0.03mm thick. Once we get the thin-sections, we put it under an optical microscope to study the different mineral grains and their shapes and structures at different magnification. At times, we also use a scanning electron microscope to increase the magnification and study the very teeny tiny details that might provide us with more information. 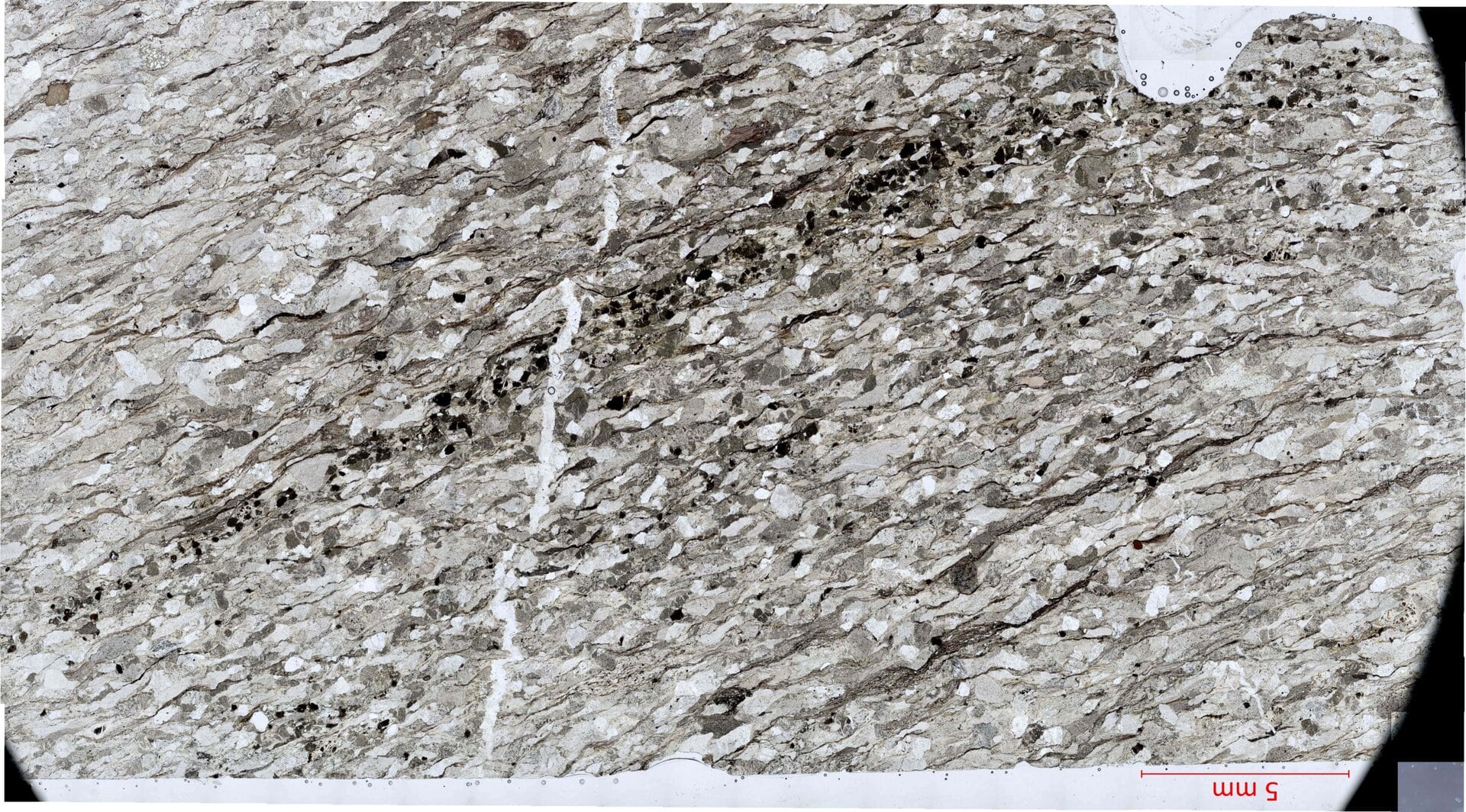 A rock thin section of one of the metasedimentary samples from Angel Island, showing the orientation and alignment of the clasts that make up the rock.

The Angel Island meta-sedimentary rocks contain quartz, feldspar, mica, iron-oxide nodules, and lithic fragments (chunks of other rocks, basically). Most of the rocks record a variation in grain sizes and contain different ratios of clasts to mud/clay matrix. Some of these rocks also contain certain indexing minerals like prehnite, pumpyellite, lawsonite, and jadeite. These indexing minerals are stable within well-constrained pressure-temperature conditions. Their presence in the rocks is crucial since it allows us to work backwards and determine the pressure-temperature (and by extension, the depth) that the rock experienced within the subduction zone. Some of the rocks also record a fabric where the clasts are oriented in the direction of shear (based on how the rock was rotated and moved within the subduction zone). Some deformation features in these rocks include: solution seams where soluble materials were dissolved out as they deformed under pressure, wavy extinction patterns on quartz formed due to the deformation of the crystal lattice, flattened clasts, etc. These rocks also showcase replacement textures where one mineral is in the process of replacing another mineral. This textural information is important since the reaction kinetics also provide us with information about the deformation conditions that the rock experienced.

Loading the same slide for scanning electron microscope study. The sample looks dark due to carbon coating to prevent storage of charge during the analysis process.

From our preliminary observation, we see that the “seemingly similar” rocks in the field record a wide range of features upon close inspection. These rocks show a gradually dominant overprint of metamorphic minerals and textures on formerly sedimentary rocks within a high pressure-low temperature environment, as expected for a subduction zone. Together with the zircon ages, we think these rocks also record different sources for the sediments that constitute the rock. With each new observation, these rocks provide us with a new clue about the subduction processes that were active 100 million years ago within the Franciscan subduction zone. My work with these rocks is still in progress and forms the majority of the work for my research project. Stay tuned as I study and sample more units from Angel Island and piece-by-piece develop a picture of how Angel Island formed within the Franciscan subduction zone, a 100 million years ago.